There is a new, phenomenal sock knitting book on the market now. It's by the same groovy chick that wrote Socks Soar on Two Circular Needles, Cat Bordhi. Now, if you thought that Socks Soar was a great book, just wait until you crack open this one. I'm not going to write a review here. So many wonderful reviews have already been written. But let me just say... Wow! Who is this woman and how does she come up with this stuff? 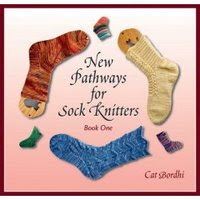 Moving on, a helpful tool Cat suggests in this book is a set of letter stitch markers. She will often tell you to knit up to a certain point near one of these letters so that no matter what size sock you're doing, you know exactly where she wants you to be in your sock.

Funny. I make stitch markers! I think I can handle this nifty little aid. And now, they're available to everyone else who may need a set (or 3) as well. I have a dozen different letter styles and matching number sets in the JL Yarnworks store right now. Here are a couple of samples. 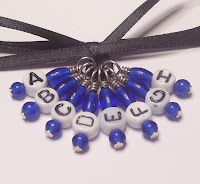 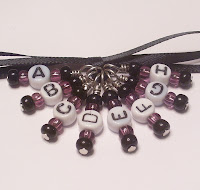 Of course, I never work alone. 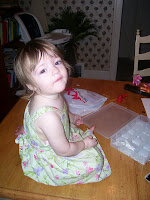 Baby Yarnworks can now climb onto the table. She's much more helpful up there. You absolutely cannot flip over boxes of beads from the floor. No ma'am. What help could she possibly be from down there? *sigh*


Posted by Jackie at 9:10 PM No comments: Links to this post

The Art of Knitting 4 Kids: A DVD to Help Teach Children to Knit 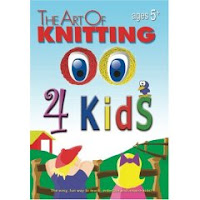 I took my daughters to the library last week to pick up a couple of books I had on hold and also to see if they had any DVD worth borrowing. We came up short in the adult DVDs (those in the section for grown-ups, not to be confused with the naughty sort), so we hit the children's section. We found Cinderella 3 (something *I've* been wanting to watch), Cats & Dogs, and The Art of Knitting 4 Kids.

Of course you know I practically squealed as I leapt towards the knitting DVD. I looked it over. It's put out by Leisure Arts....nice. It has several segments utilizing children, adults, and cartoons.....very nice. It's 99 minutes long, but segmented into short bits....SOLD! Or, erm, borrowed. Now, the oldest of the Yarnworks daughters is only 4 and the DVD said it was for children 5+, but it was blog fodder and it was free, so we took it home.

The first section features a 7 year old little boy named Ryan who teaches you how to knit. It's just him sitting there showing you how to knit, step by step. He's cute and all, but Big Sister Yarnworks was gone before he finished his first segment.

The second section features and older woman telling two children a tale about a brother and sister that learn to make their own knitting needles and later how to knit. Egads people, even these two kids on screen look bored! Don't get me wrong, it's a great tale, but it's long and drawn out and could someone pay these kids a little more to pretend to be alert and attentive? They liven up a bit when they get to make their own knitting needles out of dowels and a pencil sharpener. And are certainly attentive when they get to pick out a ball of bright yarn and get started.

This is where my oldest finally got interested. As she taught the steps of knitting, she told a tale and cartoon characters would appear in the background. As she knit, a shephard would reach his crook under a fence, gently grab a poor stuck lamb around its shoulders, pull it back under the fence towards him, and then the freed lamb would leap away. Her needle would go under the loop, grab the yarn, come back through the loop, and then the knit loop would leap off the needle. Similar tales were told as she made a slip-knot, cast-on, and cast-off. Very cute and memorable. I teach many adults that would benefit from this kind of story to help them remember what to do and in what order.

The following section is all about making a toy ball using a striped rectangle of knit fabric. I thought it was fascinating, but this section is best left for after your child has a firm grasp on knitting and changing colors (taught in the prior segment, but not easily mastered by young children).

The last segment was my personal favorite, although my oldest ended up playing in her room, leaving me alone to watch. It was an Alpaca Farm! They showed the little cria (baby alpaca) and the shearing of the adult alpaca. Then, we got to watch as yarn was spun using both mill equipment and a spinning wheel. I found it absolutely fascinating. Alas, my daughter missed it.

When the DVD ended, a surprising thing happened. My daughter wanted to watch the sheep again! She liked the segment depicting the shepherd and his flock! So we watched it again. When the children picked out their yarn, she announced that she picked red. "Red is my favorite!" she told me. The next thing I knew, she was coming out of my office with a skein of red yarn!

Elated, I leapt to my knitting needles and grabbed the very pair of US10 1/2s that I had when I learned to knit! (Well, my first real needles after the pencils my grandmother taught me on.) She happily watched as I cast on a few stitches. Then she sat in my lap and together we led the needles and yarn in unison with the DVD. She let me do most of the work, but she's 4, so I'm just thrilled she expressed an interest.

Later that evening, I was forced to either take the girls with me to Stitch 'N Bitch or to stay home. I decided to go ahead and try to take the girls with me for at least a quick visit. In a moment of sheer optimism, I packed my daughter's red yarn and needles. Sure enough, after we had something to eat, she wanted to knit. G and J watched with wide eyes as my daughter relayed the abbreviated tale of the shepherd with each stitch. She even began to lead the needles herself, using me to wrap the yarn and to keep her from losing all her stitches.

Now, that being said, let me offer my criticism of the DVD. I've already said that some segments are much too dull for a younger audience. It's unfair for me to judge it based solely on my 4 year old's opinion, but I think even 5 or 6 year olds will find most of this DVD dull.

However, my bigger complaint is the lack of consistency of technique between segments. Little Ryan and the storyteller both use a long-tail cast-on, but they do it differently. The same is true when describing how to make a slip-knot. I feel that a DVD for children should be less confusing and more consistent. Later, new methods can be introduced.

Oh, and for the record, the DVD depicts the English Method (or throwing) in which the working yarn is held in the right (or dominant) hand and wrapped around the needle. This works for me, since that's my preferred knitting method, but if you are a Continental Knitter, you may want to teach your children using a different medium.
Posted by Jackie at 1:08 AM No comments: Links to this post

New Product On The Horizon

Behold the prototype. A nice drawstring bag, perfect for small projects on the go. I have several beautiful high-quality brocade fabrics ready to sew into these great little bags. Guys, this fabric is so gorgeous that the bag would work for a formal evening out! Yet it's also ideal for day-to-day use. I'm absolutely in love, and I hope that you will be too. 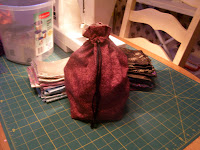 This weekend JL Yarnworks and friends were hard at work. Here is "J" working tirelessly. Once this woman gets started, there's no stopping her. She was on a roll! 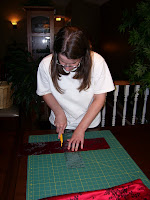 Meanwhile "G" was doing all the ironing. Here is her beautiful pile. She knew her military training would come in handy one day. She can now iron like a pro! 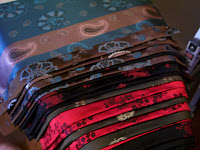 Now it's time for me to sew. No guarantees on when these will be available for sale, but if you would like to be contacted when they are, just email me at jlyarnworks [at] gmail [dot] com.
Posted by Jackie at 1:09 AM No comments: Links to this post

Jackie
I'm an on-the-go mom of two sweetly mischievous daughters and the tolerant, but loving wife of one handful of a husband! In my spare time I run a business, JL Yarnworks. Be sure to say hi!

Please Show Our Sponsors Some Love...