Today was Mother's Day, but more importantly in the Yarnworks family, it was Baby Yarnworks' First Birthday! At 12:07am she was officially a full year old.

A couple of weeks ago, my sister-in-law announced that Mr. Yarnworks' entire family would be decending on us on her birthday to help us celebrate. I panicked. Between family and friends we were looking at potentially a 30 person guest list! Sure, not everyone would be able to make it, but that's still quite an ordeal for such a little girl! After a few panicked days, Mr. Yarnworks had an idea: Let's celebrate at Grandma's house! Genius! So my sister-in-law picked up the cake and ice cream and we packed the girls in the car this morning for the 100 mile jaunt.

We stopped midway for lunch. Baby Yarnworks was ready for some food! 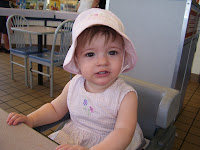 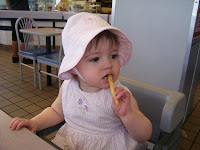 We finally arrive after an hour or so of Baby Yarnworks crying and Big Sister yelling at her to shush. *sigh* Please tell me that this gets better as they get older? Yeah. I know. I'm doomed. Anyway, everyone was all smiles. Here is Baby Yarnworks with her 20 month old cousin and Grandpa. 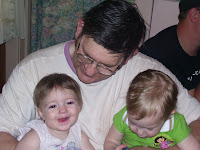 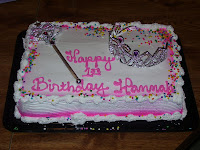 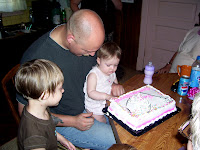 You know, she's going to get used to this whole Princess thing and be just as spoiled as Big Sister. 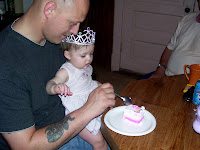 We visted for a couple more hours, Mr. Yarnworks helped his dad with some manly outdoor project, and watched as Baby Yarnworks broke down the flowerbed fence to get to Ma's tulips. At least she knows what she wants, right? (Sorry, no pics. The camera was much too far away and Baby's foot was stuck in the fence. Priorities. *sigh*)

So my baby is almost a toddler. I think to be an official toddler she needs to be able to toddle.... but we're close!

Posted by Jackie at 11:13 PM No comments: Links to this post 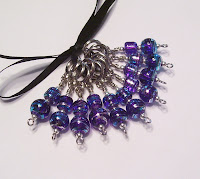 New Styles!
New Colors!
Over 50 current varieties to choose from!
And there's more on the way...
Shipping prices will be raised Friday night to accomodate the postal increase coming May 14. Be sure to shop this week to save money!
Posted by Jackie at 9:24 PM No comments: Links to this post

Haircuts, Weaning, and, of course, Knitting

Baby Yarnworks got her very first haircut today! See? That's Big Sister on the left waiting for her trim. 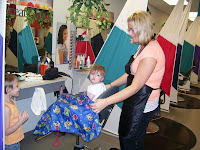 Here's a closeup of Baby Yarnworks as I know and love her. Quiet. A bit curious. One eye on Mommy at all times. With these cool rockstar punk bangs that seriously get in her eyes. They don't seem to bother her at all, but it was clearly well-past time for her first haircut. All those long wisps are the hairs she was born with and definitely had to go. They would have been trimmed when Big Sister had her haircutting fiasco, but Bad Mommy forgot the camera. 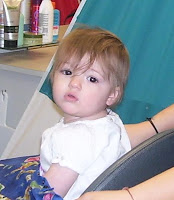 The first trims. Baby Yarnworks looks a bit distraught, doesn't she? Like she's had her favorite toy unexpectedly taken away from her. 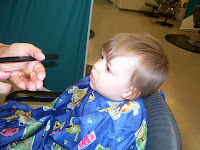 She looks absolutely miserable, but she did really well. These are all the pictures I got though. Every time my flash went off, she squirmed and made it more difficult for the stylist. I felt bad for the stylist and put the camera away. That also means that I totally forgot to take an "after" picture. Her bangs are trimmed up nice and neat and she looks nothing like her former self. I'm actually kind of saddened. The half inch that was taken off the longest wisps of Baby Yarnworks' hair is actually bothering me more than the several inches Big Sister hacked off by herself. 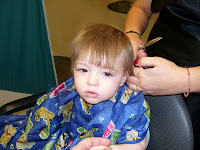 I could be extra sad just because today was a day of milestones for Baby Yarnworks. We started weaning slowly about a month ago. Baby Yarnworks would not take a sippy at all and I was concerned that weaning would take awhile, so we started a bit earlier than I had originally planned. Baby Yarnworks has responded quite well. First we cut out daytime nursings, only nursing first thing in the morning and last thing at night. Then, after I had a late night out and Daddy put her to bed, we started only nursing in the mornings. This morning I decided to try giving her a sippy instead of nursing her. She didn't fuss or try to lift my shirt. She took her sippy for awhile, giggled, and then played. So I think we're done. I'm a bit sad about it, but mostly I'm happy that I'll be getting my body back. I'm tired of back pain and the ginormous chest that keeps me from being able to see my own navel. 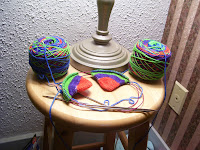 In knitting news: I made up a batch of self-striping yarn awhile ago in the colorway "Carnival" and oopsed. Two strands of yarn went into the wrong color, messing up the striping pattern. So I decided to keep this skein for myself. Weeks later (yesterday) I divided it up into 2 equal balls and realized that the problem stripes were smack dab in the VERY CENTER of the skein, making it PERFECT for socks. I couldn't have planned it any better. I decided that I wanted to make sure the stripes matched on each sock and that this would be a great opportunity to learn how to knit 2 socks on 2 circular needles. I'm using the free pattern on the Knitpicks website. 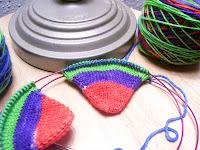 I planned to make cool bright-colored striped socks as tall as my skein would allow. Knee-socks maybe? Good experiment to see how far a skein will actually go, right? Well I was knitting on the little toesies this morning when Big Sister sits on the couch beside me, throws her foot in my face, and implores me to try it on her foot. I did and she exclaimed, "It's a perfect fit!" even though it only covered 2 of her toes. I asked her who the socks were for and she exclaimed that they were for her. So, slight change of plans. These socks have apparently been spoken for.
Posted by Jackie at 9:51 PM No comments: Links to this post

Jackie
I'm an on-the-go mom of two sweetly mischievous daughters and the tolerant, but loving wife of one handful of a husband! In my spare time I run a business, JL Yarnworks. Be sure to say hi!

Please Show Our Sponsors Some Love...